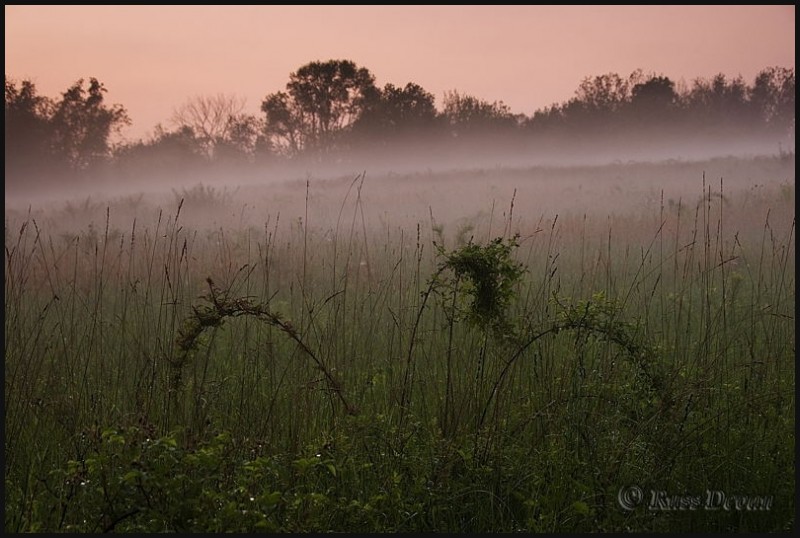 Posted by Russ Devan (New Hanover, United States) on 21 May 2008 in Landscape & Rural and Portfolio.

This was shot on Tuesday evening at about 8:20 pm, just after sunset. I noticed some low ground fog forming in our yard and the sky was beginning to clear after a day of steady rain. I had just decided to crash on the couch with my wife and watch the latest episode of NCIS since I was pretty beat (yeah, we're into those crime scene investigation type shows. I think my wife watches this one just to look at Mark Harmon...LOL. Don't even turn on reruns of JAG as she'll go into a trance from staring at Cmdr. Rabb for an hour).

I noticed the fog really starting to thicken in the old farm field down the road from our house, so I decided to let my wife have some quality time with Mark Harmon and grab some quick photos. As I mentioned in my last post, I really could use a bumper sticker that warns drivers behind me that I might make some sudden stops to take pictures. Well, this time there was no place to park without blocking someone's driveway, so I just said, "screw it" and parked right on the road (Pennsylvania doesn't believe in building shoulders on the sides of their roads where you could safely pull over if you had to. I think all the PennDOT engineers dropped out of school before they got to that chapter in Road Building 101). I put on the hazard lights, jumped out of the car, and walked into the field with the camera. After about 20 mins of shooting, wouldn't you know it.....cop. The officer pulled up behind my car looking for a driver for the empty car, so I had to wait for my shutter to close before I could walk over and show him why I was stopped. I decided to let him chimp at the images on the LCD screen to show him I had a very good reason to be blocking the road, in case the fog itself wasn't a convincing reason. "I like the one with the puddle reflecting the sky...really nice", he said. "It would be neat if you had some deer out there standing in the fog, wouldn't it?", he said. "Actually, I had thought about that exact same thing a few minutes ago, but they wanted too much money to model for me, so they all walked back into the woods before I could take their picture." (dumb joke, I know. But I didn't need another traffic ticket. I got one last summer while I was out taking pictures). "Ok, I just wanted to make sure you weren't broken down or something. Have a nice evening". Wow. I dodged that bullet. Maybe I should send him a copy of the print so I make sure I stay in his good graces for the next time I'm illegally parked when I'm out shooting. But then, he kind of reminded me of Cmdr. Rabb, so maybe I won't.

To view a little better quality version of this image, click on http://www.pbase.com/rddevan/image/97414526

thats a great image, taken just at the right time

Absolutely beautiful, Russ! I love your narratives... you really need that bumper sticker, maybe the police would leave you alone? The pbase shot is incredible! Well done. I miss quite a few shots because of no safe place to park!

Wonderfull atmosphere
The "non-horizonality" really gives something more to the shot !

Great shot - love the subtle colors and overall mood; great story. I'd have handed the cop a business card right at the outset and offered to send him a picture, but apparently you are more charming than I and don't even need that ploy! (Well, hey, we already knew that, didn't we). ; )

Beautiful! And good job not getting in trouble! I like the lines of the curving vines this way and that... almost like a fountain springing up the fog

Love it! I can never get enough of any image with fog.