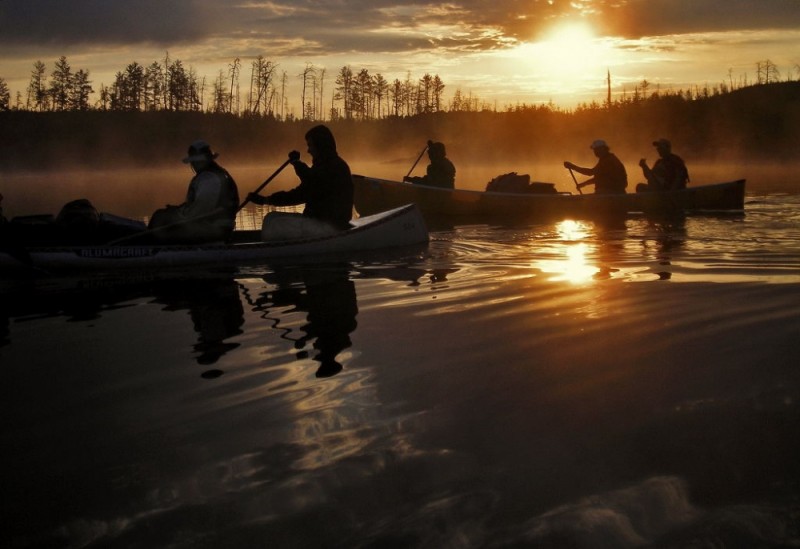 Gorillas In The Mist

I will be out of state for several weeks due to vacation and work-related travel, so I will not be able to post as frequently as I would like. This week I will be attending Boy Scout summer camp in New Jersey with our scout troop and my son, who is a First Class Scout and nearing his Star Scout Rank. Our troop will be bringing 42 boys to summer camp this year. We are usually one of the largest, if not the largest troop at camp when we are there. So, in my absence, I will post some Boy Scout-related photographs during my week at camp.

This image was taken not by me, but by my friend George who is an ASM (Asst. Scoutmaster) in another troop while they were at Northern Tier High Adventure Camp in northern Minnesota. During their canoe trek, they paddled over 100 miles in about 9 days in very remote areas of northern Minnesota and southern Ontario, Canada. This photo was taken just after sunrise one morning on a lake in southern Ontario. The title was suggested by George.

The older scouts in our troop will also be canoe camping while at summer camp this year and will travel down the Delaware River, beginning well upstream of camp.

Woooow, Exquisite and Gorgious,,, looks like a dawn dream..

A beautiful composition with the human figures addition that extra touch to the imposing silhouette.

I have no words, it's a beautiful image... Very well done!

Quite a beautiful image you have posted here! Strikingly beautiful, and the quote from Sir B-P is very apropos, especially for us photographers.

Hope you all have a wonderful time at camp! I remember my Scouting years quite fondly...

A terrific image, Russ ... the warm light is spectacular!