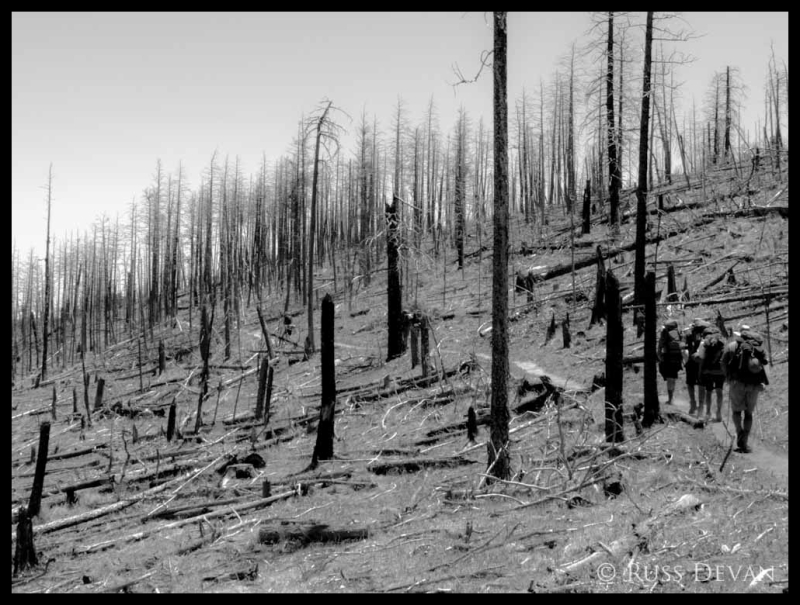 Our scout crew hiked through an area of forest at Philmont that was burned by the Ponil Complex forest fire in 2002. The forest fire was the largest in New Mexico history and was started by a lightning strike. In many forests decimated by fire, the dead trees may stand for many years after the fire has ravaged them, eventually succumbing by wind. Even though many of the dead trees remained standing nine years after the fire, the area had an odd, quiet beauty about it that I found in the patterns of the dead Ponderosa Pine. It was very quiet, almost like walking through a ghost town, or a cemetery. One thing I noticed while hiking this area was a complete lack of animals, except for an occasional raven that flew over. On the other side of this mountain, beside the trail, we noticed the skeleton of a large animal. Later that day, we were told that it was that of a burro, one that may have escaped from Philmont's Ponil camp where they maintain a herd of burros. I had to wonder if it died in the fire, or whether it succumbed due to another reason.

While we were backpacking, the Las Conchas forest fire began burning about 100 miiles south of Philmont. As we hiked south, we could see and smell the smoke from this fire. Philmont staff are monitoring this fire to determine if backpacking crews in the backcountry will need to be evacuated. Although, this weighed on everyone's mind while we hiked, we were fortunate that the fires didn't affect us. However, a section of state forest to the north of Philmont was closed and all scout crews in that area were evacuated, due to the possibility of lightning strikes that could ignite the tinder dry forests. No significant rain has fallen in the previous 10 months, causing a fire ban throughout Philmont. Due to the parched conditions, dust was everywhere and got into every nook and cranny of our gear and our persons. That was the one thing about our trek for which I wasn't prepared.

Nice processing. There is a certain stillness and atmosphere here.

your monotone processing makes this place look very desolate and rough, almost like a major storm has gone through recently... interesting photo!

I imagine it was eery. Amazing how long it takes for it to rejuvenate itself!